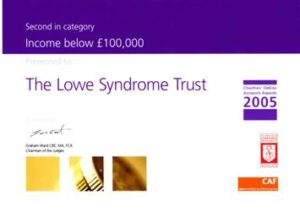 December 2005 Sponsored by CAF (Charities Aid Foundation) and The Institute of Chartered Accountants in England and Wales (ICAEW).

Category D – charities with an income below £100,000 – Lowe Syndrome Trust

The lowe Syndrome charity received a cheque for £750 and a seal for the website at the Awards presentation on 2 December 2005 at Chartered Accountants’ Hall, Moorgate Place, London. After the awards’ ceremony the was a seminar at which Shirley Scott, Chief Executive of the Charity Finance Directors’ Group and Judith Miller, Senior Manager at Sayer Vincent discussed trustee reports under SORP 2005.

By recognising best practise in financial reporting, the Awards aim to raise the standard of online reporting and encourage more charities to offer their financial information in this way. Graham Ward, Chair of the Judging Panel said: “This year more than any other, charities of every size and type have demonstrated the highest standard of practice in their financial reporting. We have seen some excellent examples of online reports and accounts.”

The charity would like to congratulate the unpaid volunteers including Andrew Thomas and accountants Groman & Company who achieved this award.

In 2004 the charity was commended by the charity awards by Charity Finance Magazine 2004 in the medical and healthcare category. The Charity Awards recognise and celebrate excellence in the leadership and management of charities. Highlighting charities’ management achievements helps to spread good practice throughout the sector, and draws attention to the talent and expertise being brought to bear on voluntary activity in the UK

An independent awards panel takes a range of factors into account. Successful nominees demonstrate achievement in one or more of the following areas.