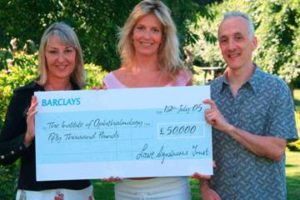 Penny Lancaster, met Dr Tim Levine , Lecturer in Cell Biology at the Institute of Ophthalmology , University College London. Together with clinical colleagues at Moorfields Eye Hospital , they will be tackling a rare genetic disease thanks to funds from the charity the Lowe Patron Penny lancaster presents cheque for Cataract Research to Dr Tim LevineSyndrome Trust.

Ms Lancaster was delighted to hand over a cheque for £50,000 to Dr Levine, which will fund a three year research project entitled “The Cell Biology of the Effects of Lowe Syndrome in the Eye”.

Lowe Syndrome is a rare incurable disorder that affects only boys and produces congenital cataracts in the lens of both eyes, muscle weakness, weak bones, kidney and brain development problems. Sadly life expectancy is short. 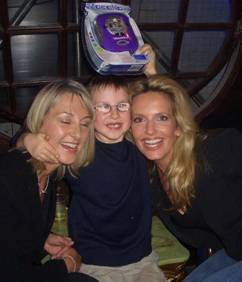 Penny Lancaster with Lorraine and OscarThe disease was first recognised in 1952 by Dr Charles Lowe, and is caused by a gene mutation which makes a defective version of an enzyme named OCRL1, which is needed for normal function of tissues like the lens, brain and kidney, although the reasons for this are still quite unclear.

Pictured is Penny with Charity chair Lorraine Thomas and Oscar who has Lowe Syndrome.

On July 17th 2005 The Sunday Express newspaper reported the cheque presentation for the UCL cataract research project by Penny, and an article was in OK! magazine. 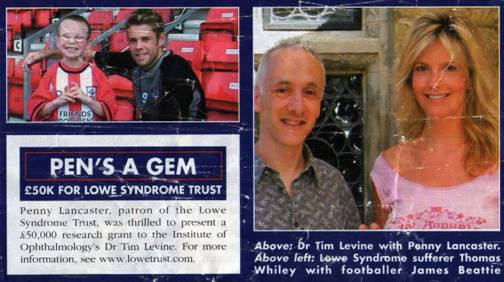