(next grant will be issued shortly)

You are invited to apply for research funding of up to £50,000 from the Lowe Syndrome Trust to support existing or new research projects in Lowe Syndrome.

Lowe Syndrome is a rare disease caused by a defective X-linked gene results in the loss of enzymatic (OCRL) activity hydrolyzing the lipid phosphatidylinositol 4,5-bisphosphate. This enzyme defect can affect many organs, including the brain, eyes, kidneys and bones, and is associated with a higher mortality as age increases.

The aim of this call is to promote studies of the underlying disease mechanisms that may eventually lead to novel treatments and ways of improving the medical and social care of patients with Lowe Syndrome. We particularly welcome proposals that focus on:

– the mechanisms leading toward a higher mortality in Lowe Syndrome patients

– the exploration and application of model biological systems in screening for drug treatments.
For further information and Application Form please contact us.

Proposals will be submitted to the charity medical advisory board and follows a peer review process. Previous Lowe grant recipients are also invited to apply for a continuation grant.

The Charity is a listed non-commercial Partner of the National Institute for Health Research (NIHR). These are organisations that award research funds as a result of open competition across England with high quality peer review; fund research that is of clear value to the NHS; and take account of Department of Health and NHS priorities and needs in their research funding strategies. See www.nihr.ac.uk

The charity has funded and coordinated research projects across the UK, Europe and USA (for the complete list please view the Lowe Syndrome leaflet showing all research funded):

Here are some of the research grants, for a complete list see the Lowe Syndrome leaflet

Imperial College London
An inital grant award of £50,000 over 3 years was made to the Department of Chemistry, Imperial College London to support a Phd studentship to research a chemical test for the OCRL enzyme. The research is entitled “Synthetic receptors for inositol phosphates: a novel diagnostic tool for the oculocerebrorenal syndrome of Lowe” by Dr Ramon Vilar-Compte and Dr Rudiger Woscholski . The grant will also be used to fund PhD student, Marianna Mirabelli, who recently completed a Masters degree in Biomolecular Sciences at the College. Research was continued in UK under Dr. Joachim Steinke and in Spain under Dr Ramon Vilar who transferred to Tarragona Spain at the Institut Catala d´Investigacio Quimica ICIQ).

University of Dundee
A grant award was made to Dr John Lucocq of Dundee University for a 3 year research project entitled “OCRL1 and its Lipid products – high resolution localisation and their role in membrane traffic and cell polarity”. See Grant Award.

Manchester University
Dr Martin Lowe at Manchester University was initally awarded a grant for £50,000 for a 3 year research project entitled “Targeting of the phosphoinositide phosphatase OCRL1 to the golgi apparatus”. A further grant of £72,000 was awarded for research entitled “Zebrafish as a model organism to study Lowe Syndrome” and featured in BBC news. The Zebra Fish is now available for further research.

Institute of Opthalmology
A grant award was made to Moorfields Eye Hospital Institute of Ophthalmology to Dr T Levine for a research project into Lowe Cataracts entitled “Cell Biological Analysis OCRL1 in human lens epithelial cells.

Addenbrooke’s Cambridge
A grant was awarded to Dr Antony Norden for a Kidney Cell research project at the Department of Clinical Biochemistry, Addenbrooke’s Hospital Cambridge.

Purdue University
A grant was awarded to Dr Claudio Aguilar for a project entitled “A Study of the behaviour of cells from patients suffering the Lowe Syndrome disease. See 2013 Purdue research paper “The Lowe syndrome protein OCRL1 is involved in primary cilia assembly”.

Great Ormond Street Children’s Hospital
A grant of £9000 was made to support a Kidney Research Project at Gt Ormond Street Hospital/ICH London, headed by Dr Van’t Hoff, Robert Unwin and Guido Laube, to whom Lowe Syndrome patients have donated urine samples so that OCRL kidney cells can be cultured and also made available for other research projects. The research is entitled “An investigation of intracellular metabolism in renal proximal tubular cells from patients with LOWE-Syndrome”. A paper was published in May 2008 Renal Phenotype in Lowe Syndrome. This concludes “Patients with Lowe syndrome do not have renal Fanconi syndrome but a selective proximal tubulopathy, variable in extent and dominated by low molecular weight proteinuria and hypercalciuria, the classical features of Dent disease”

The UK charity initially supported the USA Lowe Syndrome Assocation (LSA) with an award of $15,000 towards a total of $60,000 funding for two research projects. The first grant was to Prof. Jeremy W Thorner, Division of Biochemistry, Molecular Biology University of California, Berkeley, USA entitled “Phosphatidylinositol 4-Kinase, Pik1, Shuttles Between the Nucleus and the Cytosol Exploring the Physological function of PtdIns (4) Generation in the Nucleus”. The other research project entitled “Genetic Suppressors of 5-Phosphotase Mutants in C.Elegans” was carried out by Erik M.Jorgensen, Ph.D and Kimberley R. Schuske Ph.D in the department of Biology at the University of Utah in Salt Lake City USA. LSA reviewers commented on the projects as “well conceived and outstanding”, “promising” and “have the potential to reveal significant insights about Lowe Syndrome and lead to new treatments”.

The first international medical conference on Lowe Syndrome was held at the National Institutes of Health (NIH) in Bethesda, Maryland USA. in October 2002. The event was supported by a grant from the USA Office of Rare Diseases, the Lowe Syndrome Association USA (LSA) and the Lowe Syndrome Trust. The Trust would especially like to thank the LSA, lead by Kaye McSpadden, Director of medical affairs and Robert L. Nussbaun, M.D, head of the NHGRI and all the participants. The meeting was attended by about 30 people, with some parents and a specially invited group of distinguished doctors and researchers from across the USA, England, France and Italy from disciplines including opthalmology, neurology, nephrology, dermatology, dentistry and endocrinology. The purpose of the meeting was to discuss the clinical problems in Lowe Syndrome, consider issues relating to treatment and identify possible avenues for clinical research. The UK Lowe Syndome Trust attendees were Dr David Taylor, Prof Bruce Caterson, Mike Harrison and parent Andrew Thomas. 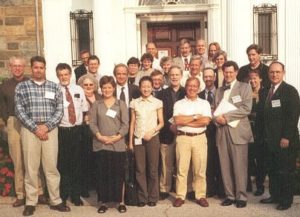 The meeting addressed issues including the proper treatment of infantile glucoma and the advisabilty of lens implants, the link between renal disorders, cartilage and growth, growth hormone therapy, kidney transplants, the nature of cysts common in Lowe Syndrome and behavior observations (such as the hand-flapping well known to parents). Lowe Syndrome behavior was classified as an Autistic Spectrum Disorder. A full account of the meeting is available from the LSA.

On 2nd Dec 2004 a second symposium was held at the Royal Society in London which the UK researchers, European and others including R. Nussbaun, M.D, head of the NHGRI USA is attended. The outcome of the discussions on the links between Dents disease and Lowe syndrome clearly indicated that clinical syndromes as they are described in the medical literature are not simply accounted by a single or multiple gene defects.

On December 9th 2006, a group of researchers gathered in a satellite meeting at the 46th American Society of Cell Biology (ASCB) meeting in San Diego. This satellite meeting, sponsored by the Lowe syndrome Trust (UK) and given under the auspices of the largest and most prestigious professional scientific society for cell biology in the world, the ASCB, was well attended by 40-50 cell biologists, including a number of young investigators from outside the Lowe syndrome field who were attending the ASCB meeting.

A suggestion that had wide support was the establishment of a clinical data base of Lowe patients from around the world, to enable researchers to correlate clinical symptoms with DNA tests, Enzyme tests, and treatments.

This website uses cookies to improve your experience while you navigate through the website. Out of these, the cookies that are categorized as necessary are stored on your browser as they are essential for the working of basic functionalities of the website. We also use third-party cookies that help us analyze and understand how you use this website. These cookies will be stored in your browser only with your consent. You also have the option to opt-out of these cookies. But opting out of some of these cookies may affect your browsing experience.
Necessary Always Enabled

Any cookies that may not be particularly necessary for the website to function and is used specifically to collect user personal data via analytics, ads, other embedded contents are termed as non-necessary cookies. It is mandatory to procure user consent prior to running these cookies on your website.